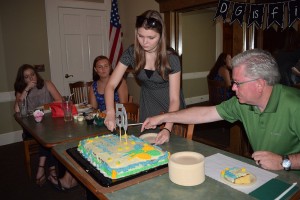 This past year, as I approached my 50th birthday, I began reflecting on my life.  I looked back at the victories I have had through the years both personally and professionally and attempted to discover the common thread of my successes.  There are so many people who have played a role in shaping my life.  Many of them entered my world as strangers but now have become lifelong friends.  I could begin listing people, events and circumstances that have powerfully impacted me and it would quickly become unyielding and boring to most of you reading this.  Without question, however, the common thread is the simple fact that strangers, people who I had no idea existed  could understand the role they would play in shaping my life.

With this understanding and appreciation, I wanted to do something that not only allowed me to mark this milestone but also celebrate the power an absolute stranger can have on someone’s life.  My pastor, Scott Moore at Believers Church in Statesboro, encouraged me to read “The Blessed Life” by Robert Morris.  We share a love for reading and a thirst to do more to help shape our community in positive ways.  Like his other recommendations, this book was on mark.   The book contains a personal story of a pastor who responded to God’s call to give in every way.  The more he gave, the more he was given.  At one point he attempts to ‘out give God’ and through this test he was taught the power of multiplication of God’s goodness. 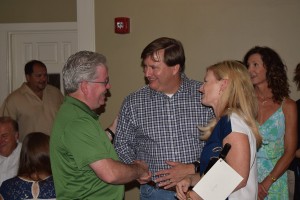 That shaped my idea to spend my 50th birthday, August 14, 2016, completing 50 random acts of kindness.  Not only did I want to make complete strangers day though loving kindness I had a second goal in place also.  I wanted to test my ability to out give God for just one day.  The idea was in place so I began to plan the day.  I shared my idea with my wife and daughter and asked that instead of having a celebration with friends, lets instead use the money we had set aside to do 50 random acts of kindness.  They agreed but did not hold up their end of the bargain.

Lori and Edie Grace decided to reach out to our friends and invite them to a dutch treat gathering in my honor.  On the invitation, they shared my idea and asked for each recipient to write a note to share a memory of how I had touched their life.  They also encouraged each of them to support my idea by performing a random act of kindness and sharing that with me.

The “gathering” was a very humbling low-key event held at R.J.’s Grill in Statesboro.  Some of my closest friends gathered to enjoy great food and reminisce about their role in my life over the past 50 years.  They brought notes and gifts for me to share with others the following day.  At that event, thanks to those who attended, before I even started my “secret” project my budget had been doubled.  I had not even started my “project” and God was ahead. Multiplication!

Excitedly, we began with our first stop the next morning at Uncle Shug’s Chicken Barn. It is a popular local restaurant owned by a great friend.  For nearly an hour, he allowed us to take over the restaurant and everyone who walked in or came through the drive through we purchased their meal.  The stories from this first hour were powerful.  The shock and disbelief that someone would do something so simple was stunning.  When I told them it was my birthday and instead of receiving gifts I was giving, many of them tried to repay me.  I simply asked that they pay it forward in some  way.

From there we went to church where Pastor Scott unexpectedly called me to the front and shared with the congregation how I was spending my day.  He prayed with me and for me and encouraged others to find a way to honor me and more importantly God through their own random act of kindness. 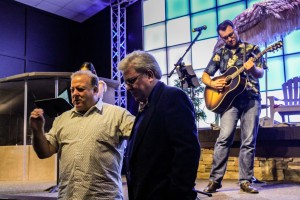 Then onto the McDonald’s drive-through where we purchased everyone in line behind us meals.  This was a bit amusing.  The cashier could not add all the tickets up and let me pay for them all together.  So I had to pay each ticket indidually which took a little longer than either of us would have liked.  During t

he process the cars behind me started blowing their horns and one gentleman shouted an obscenity directed at me.  I wonder how he felt when he learned what I was doing.  God won again.

Next stop was Larry’s Subs owned by another great friend of ours.  He graciously allowed us to take over the restaurant during his lunch rush and we were able to buy everyone’s meal(s) who came in during that hour.  This included the leadership team from one of my favorite churches, Southbridge.  They had spent the morning unselfishly serving others and God had directed me there as a stranger to treat them.  Several customers where moved to tears during that hour.  They shared stories of hardships and challenges in their life and how this simple gesture gave them renewed hope. 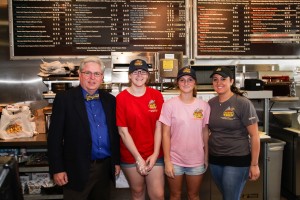 A long time friend, Dal Cannady, who is a popular television reporter for WTOC-TV the CBS affiliate came in and allowed me to buy his meal.  He in turn took a picture and shared it on his social media to thousands of followers.  This ignited and inspired more giving from total strangers.

At this point we had reached our 50, but I still had a pocket full of money that others had given me.  So we continued the fun on to Subway, Popeyes and back to Uncle Shugs.  We had been given a gift card to Chic-Fil-A so we actually continued the fun through Monday morning where we purchased strangers food in the drive through.

It was exhilarating.  The stories people shared, the tears of joy, the heart felt thanks is enough to power me to do even more and more.  But what happened during the day was completely unexpected.  I received calls, texts and emails of my friends and STRANGERS who had seen this on social media who were performing their own random acts of kindness.  Two of my friends, in two different cities, went into Waffle Houses and purchased everyone in the restaurant’s meals.  They purchased gas, bought groceries, paid for medicine and purchased a lot more meals than I ever could of dreamed of doing.

My goal of 50 was a success but my test to out give God was an utter failure.  I was exhausted but over joyed with the success and multiplication of this simple idea.  I will never forget this day and how I was allowed the opportunity to repay a small part of the kindness and goodness I have been so blessed to receive throughout my life.

If you are reading this and you were one of the strangers who were blessed by this I would love to hear your story of how your paid it forward.